On Saturday we had Kai’s first birthday party. It was amazing!! We went with a super hero theme, it seemed appropriate. We invited a few friends down to our local cafe we’re we’d booked a room. We had decorations and bunting. I spent a lot of time trying to convince people to help us eat all the candy at the Candy Bar (too much candy is never a terrible problem to have) or to help us eat the cake (again: too much cake, possibly the BEST problem to have).

Kai, unfortunately had a bit of a down day and ended up sleeping through his party, but we had a great time. There were lots of people we adore and hadn’t seen in a while. Special shout out to Ben and his family who came. Ben is another NKH kid, and it was AMAZING to have you guys come up to see us!! It was also super nice to have the Duff Club back together for a bit too (heart you guys for staying late and helping us clear out – you guys are the best!).

Thanks to everyone who came, we had a lovely time. I’m glad we managed to celebrate. 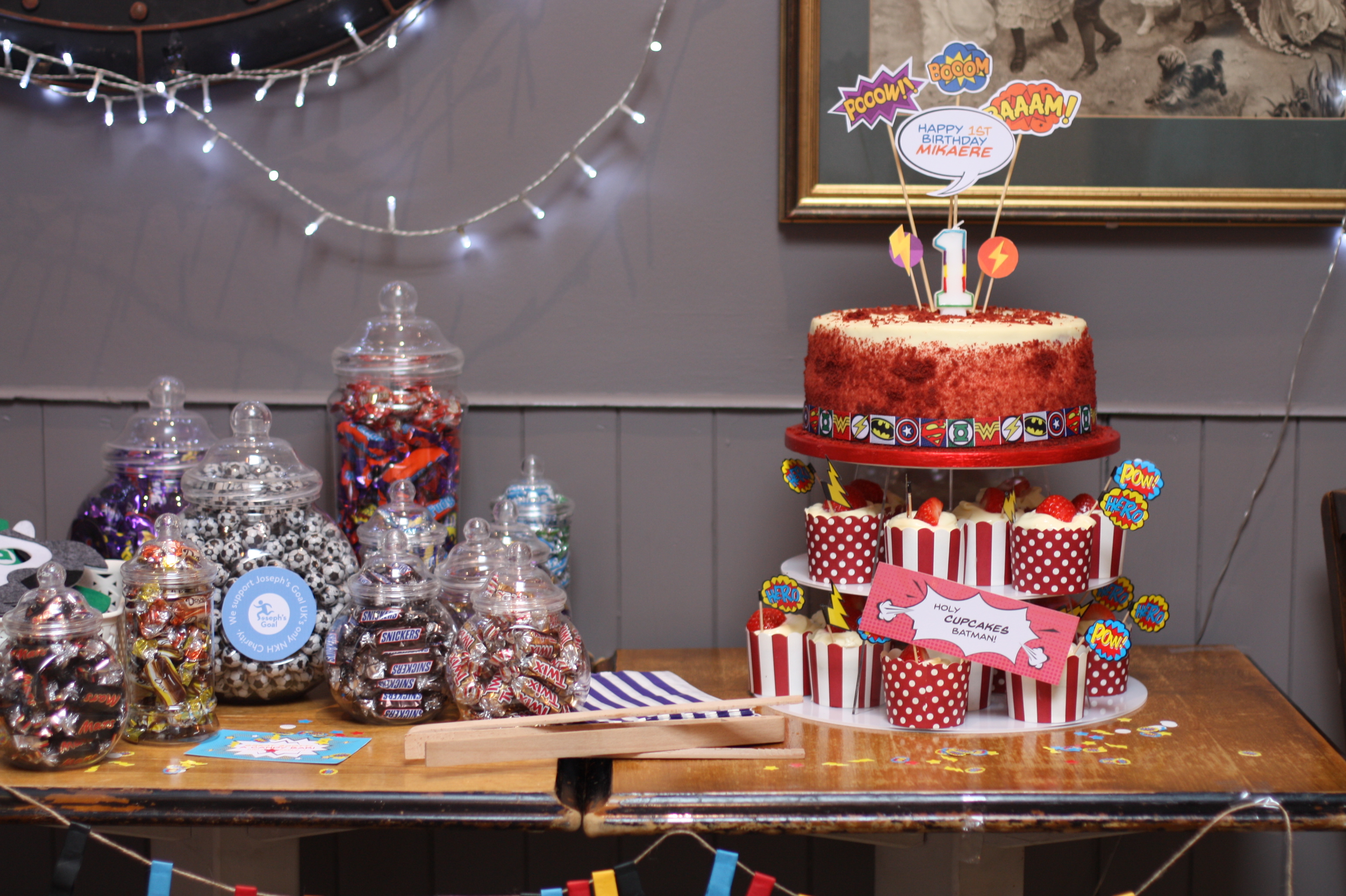 Here’s the other thing. This birthday marks a year of fundraising for an NKH Cure. We support Joseph’s Goal and Prof. Nick Greene with UCL. Of course we do. They’re the closest to a cure. They have mouse models and are pursuing treatments that would affect a large proportion of the NKK population, not a select few. Fundraising for a cure seemed like the best way forward for Kai’s long term future.

Except that now… now that Kai is much older his disabilities are more pronounced. He needs more support, and to be frank: the NHS is sorely underfunded. The conservative government is still pursuing austerity measures that are absolutely affecting the most vulnerable of us – those cuts have meant services pulled back for Kai. We’ve rallied and are paying out of pocket for what we can (like weekly physio sessions and bath equipment so Kai can bathe safely), and are talking to charities about funding others (like a lyrcra DMO suit to help prevent scoliosis and weekly osteo sessions and additional medical equipment like syringes and NG tubes).

Recently we came across two treatments we think will help Kai – they’ve both already had outstanding results in other children with NKH. We hope that with them, Kai will have a chance at hitting some of those developmental milestones we’ve missed (like head holding, sitting, and if we’re really getting our hopes up, walking and talking).

The first is Quantum Reflex Integration with Low Level Laser Therapy. It’s done at home, and requires the purchase of a laser (which costs up to £5000). This treatment will hopefully help with some of those developmental issues.

The second is Neurofeedback Therapy – this is done at a local clinic in Battersea. Neurofeedback uses an EEG to assess Kai’s brainwaves, and the therapy provides sensory feedback (with music or vibrating cuddly toys), to encourage a more stable brainwave pattern. We hope this help with raising Kai’s seizure threshold, hopefully reducing the number of seizures he has. To be effective, it’s been suggested we do at least 20 sessions, which will cost up to £1600.

Two treatments we think would be game changing for Kai that we can’t afford to pay for ourselves. How heartbreaking is that? That there are things that could help Kai that are denied to him because of something stupid like money?

And so for us it makes sense to stop, temporarily, fundraising for Joseph’s Goal and to start fundraising directly for Kai and what Kai needs.

We know we’re asking a lot, but we can’t afford these treatments out of pocket. It’s especially hard to see other children having success with these treatments and not be able to do the same for Kai.

So. We’ve switched our focus from Kai’s long term needs (like a cure from Prof. Nick Greene) to his short term needs (QRI LLLT and Neurofeedback Therapy).

And I know we ask often, and we ask a lot. We plan to hold a lot of fundraisers in the next few months to help us, so keep an eye out for those. But if you’re able: please donate something for Kai’s Birthday. Anything would be very much appreciated.