By Ellly 1st November 2017 No Comments

One of the things we were never sure Kai would be able to do is eat. He lost his suck. Twice. Well, it would be more honest to say that when he was born he never *had* a suck, and had to relearn once he was out of the glycine coma. Then when the two month curse hit, he lost it. It took a long long time to regain, and even now we have regular visits with our Speech and Language Therapist to make sure Kai’s swallow is safe.

We’ve had to do all sorts of things to make sure feeding is safe – smaller (and much more frustrating) teats, external pacing (frustrating for Kai) and all sorts of oral stimulation. It’s worked out pretty good though, so far. Because now we’ve progressed onto purée’s and porridge. Which essentially means anything that I can blend with our little hand held blender and run through a sieve is fair game.

Just kidding! What special needs mama has time to blend at this point? I don’t blend. I buy Piccolo and Ella’s and let *them* do all the blending. I do the heating up and the feeding. Maybe later down the line I’ll get into cooking and blending, but not right this minute. Till then, it’s a pretty fun time right now. It means that Kai is trying all sorts of new foods and what’s even *more* fun is that he’s able to very clearly show what he likes and does not like.

Guess which one this is? Turns out lentils are in! Alright… what about these ones? 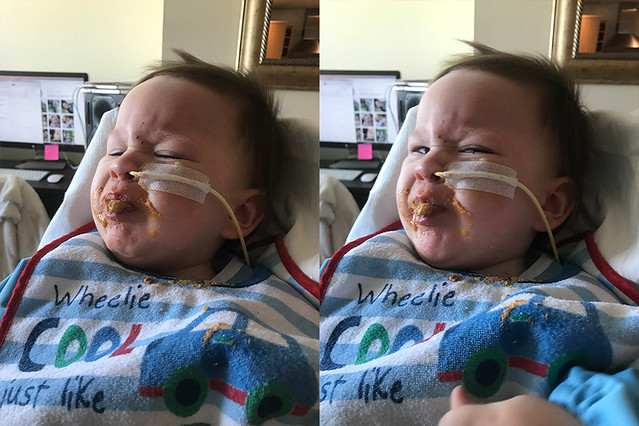 Lamb stew is definitely *not* in.

I’m glad it’s happening. We offer food orally pretty much every meal, unless he’s post ictal. Which is to say, post seizure-y and completely konked out. It wouldn’t be safe to feed him when he’s that lethargic and groggy. We offer him as much as he wants – he’s quite cute at letting us know when he’s tired and had enough. I say cute, but what it really means is that he’ll point blank refuse to open his mouth, his lips all pursed together. Looks like this: 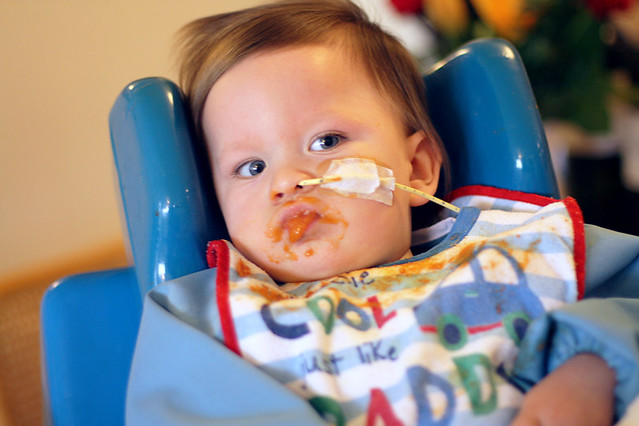 And at that point, we’re done. I’ll never force him to eat orally. We have the tube, so the rest of his meal goes down it. Easiest thing in the world. Very not neurotypical though. A friend of mine was telling me about how her 1.5 year old sometimes just refuses to eat and so doesn’t until the next meal, when he’s hungry. My brain kept saying ‘just put it down the tube’ but of course, her little one doesn’t have a tube. I don’t know how the neurotypical manage, I’m glad we don’t have that stress of what to do if Kai can’t/won’t eat.